Thanks to Nottingham BID, the 2022 Young Creative Awards winners of the Visual Arts category have their work on show in the city’s shopfronts. A huge congratulations to Hollie Betts, Adelle Iversen and Eve Moore – this year’s Visual Arts winners – whose artwork you can see out and about in Nottingham until Sunday 25 September. 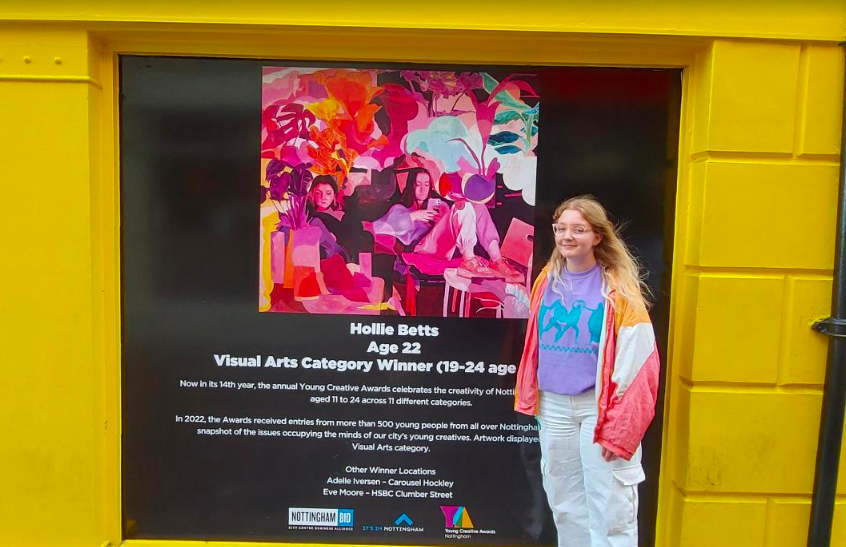 We are delighted to be working with Nottingham BID to celebrate the talent of some of this year's Young Creative Awards winners. Nottingham BID is a city centre business alliance, with more than 700 members in the retail, leisure, office and education sectors in the city centre. Nottingham BID's aim is to put Nottingham firmly on the map as a regional and national city of choice for shopping, leisure, work and study by delivering a range of initiatives which are driven and shaped by the members for their benefit.

This September, Nottingham BID has partnered with Young Creatives Nottingham to provide an opportunity for work by this year's three Visual Arts category winners to be displayed in the windows of city centre businesses - exposing their talent to a variety of people and as well as creating vibrant windows for businesses. 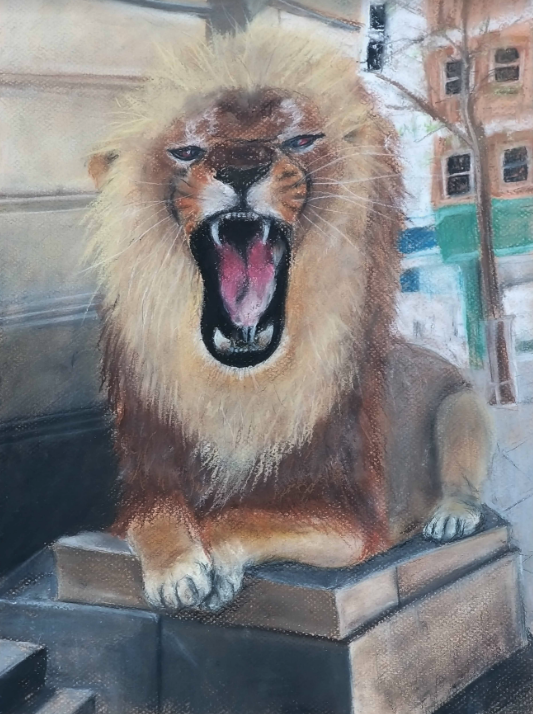 Adelle’s piece is drawn in pastel – she’s been really interested in drawing cats recently, after winning a competition to draw a certain scene from the Warrior Cats book series. Hence the Nottingham’s famous left lion, brought to life! Her piece is available to view in the window of The Carousel, Hockley. ‘It felt really cool to see my work in The Carousel window,’ says Adelle. ‘This is the first time I’ve had any of my work exhibited anywhere before. Art is my favourite subject at school. I like to use chalk pastels and coloured pencils.’

When asked how it felt to see her piece in the shop window on Bridlesmith Gate, Hollie replied: ‘Weird! Good weird. Amazing.’

‘I’ve been studying Fine Art at uni. Just finished. Until this summer, I was living in an eight-bed student house and my piece is two people we used to live with. Just chilling in the living room.’

‘I made the canvas - the stretcher and woodwork. In real life it’s 160cm wide, 140 top. It's mainly oils and in a few places I’ve used oil stick – a really chunky oil pastel. You can sometimes lose control of it which is quite nice. I usually make my pieces on Photoshop before I paint them. A lot of my work is about the trends in house plants and our connection to nature. I look online for trendy house plants, take photos, put it all together, chop it up and really glitch it all and paint it. When I saw the Young Creative Awards I thought I’d just give it a go. I’ve been working freelance in Derby but I’m hoping to work full-time in a gallery soon.’ 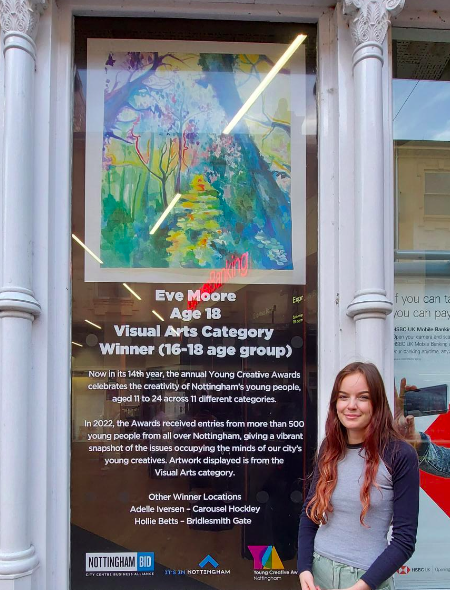 Eve’s piece is in the window of HSBC on Clumber Street. After completing the Foundational Art course at Nottingham College, she is now about to embark on an Illustration degree at NTU.  ‘It feels amazing to see it up there. I didn’t realise it would be so big!’ says Eve. ‘I went for a walk in Lea Woods, in my hometown of Matlock, and it looked really pretty so I took a photo of it. I edited the photo to make the colours look really different and then replicated it in watercolour. It’s really blobby and weird. I’m so happy with it. This is probably one of my favourite things I’ve ever done. I’ve never looked at something I’ve made before – usually I don’t like stuff I’ve made but I absolutely love this.’

Alex Flint, CEO of Nottingham BID says: 'We are delighted to support Young Creatives Nottingham, it is a great way to make the city centre more visually appealing and give some points of interest - as well as showcase the talented individuals in the city we are championing.'

The work of Hollie Betts (Bridlesmith Gate), Adelle Iversen (The Carousel, Hockley) and Eve Moore (HSBC, Clumber Street) is in place until Sunday 25 September 2022. A huge thanks to Nottingham BID for co-ordinating this outdoor exhibition of our Visual Art winners.